Sjaak van Schie BV was founded in 1980. The organisation started with a relatively small nursery in Kwinstheul. Initially, the organisation mainly focused on the cultivation of Dianthus flowers; a visually attractive and versatile flower. Not only the flowers, but also the business flourished. In 1997, Sjaak van Schie decided to open another nursery at the Schenkeldijk in Maasdijk. This nursery has grown to become our head office.

When the Dianthus market started changing, the focus of the organisation shifted to the cultivation of Hydrangeas. It was in 1999 that Sjaak van Schie decided to open another nursery in Portugal. This nursery primarily focused on the growth of Dianthus flowers. Gradually the entire Dianthus business has moved abroad. This allowed the Dutch nurseries to dedicate all their attention to the cultivation of Hydrangeas. In early 2002, Sjaak van Schie made the decision to sell the original nursery in Kwintsheul. At that point, it was necessary to increase the capacity of the more advanced nursery in Maasdijk. The organisation expanded with 3 ha. of greenhouses and built a major open air growing field of nearly 24 ha.

Over the years, the organisation has experienced many changes. The cultivation process has benefited from technical advancements and continues to be under constant scrutiny. As a result of our eye for innovation, an attitude of continuous improvement and a strong team of employees, Sjaak van Schie BV has grown to become a dynamic and internationally oriented business. 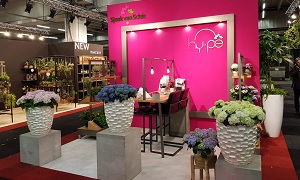 From 7 to 9 November, the Royal FloraHolland Trade Fair in Aalsmeer will take place again; the largest international trade fair for the floriculture industry.